!! Attention, this article is purely informative and based on real-life experiences, it does not replace medical advice or treatment given by your vet… I simply want to advise you on the steps to follow if your rabbit has the disorders listed below… Please do not underestimate worrying symptoms, without seeking medical advice…!!!

In rabbits, several infections with more or less the same symptoms (a runny nose, sneezing…) are gathered under the name Coryza. This respiratory disease is generally dangerous and highly contagious. In any case, be careful because it is far from being benign! It should be noted that many rabbits carry the coryza germ without showing any symptoms, but they are not healthy and the disease can be triggered suddenly by violent stress, for example.
How can it be cured?

At the first signs of rhinitis: discharge, sneezing, you should consult your vet immediately. The earlier you treat it, the more likely your rabbit will heal quickly without any damage.

● Take a broad-spectrum antibiotic, this is well tolerated by rabbits and is, in addition, an anti-inflammatory for a few days.

● Do inhalation sessions with a ready-made mixture such as Respicat.
Another important thing is the flushing of the nostrils. It is important to clean your rabbit’s nose thoroughly to remove the mucus as much as possible. Using saline and syringe (without needle of course!), saline is introduced into each nostril to wash the rabbit’s nostrils. Seawater sprays are also very useful for this cleaning (in this case, take an infant spray which the nozzle is smaller and its jet is less powerful).
It is important to ensure that this cleaning is not too aggressive, as it regularly causes your rabbit to sneeze. Sneezing too hard can cause irritation. As soon as you see that your rabbit’s nose is clean, then don’t insist.
If you follow your vet’s instructions, and you have consulted him as soon as the first symptoms appear, there is no reason why your rabbit should not heal…

● If you notice that there is no improvement after the treatment above, then you should consider taking a nasal secretion to culture the right bacteria and take the antibiotic that will effectively eradicate them.
Some of the worst cases can turn into a lung infection, called pasteurellosis… In this case, the vital prognosis is worse, it is an incredibly tough infection, and few rabbits are able to overcome this infection.

In my own case, Harry contracted a beginning of coryza, so we followed the treatment mentioned above…
Unfortunately, He did not recover after his treatment. So we analysed his nasal secretions and adapted the medication.
Despite this, his condition was still the same, no improvement.
So we scanned Harry to try to found out where his problem came from. This revealed that two teeth (1 on the left and the other on the right) on the upper jaw had their roots that were becoming infected. Harry was 8 years old at the time, so the fact that two of his teeth were deteriorating was no surprise.
Our vet recommended removing them, as this beginning of infection could worsen and reach his sinuses. 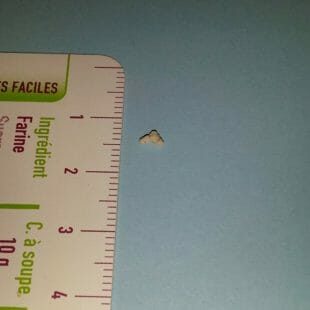 But surprisingly, the scan revealed that Harry’s nasal cavities were filled with rhinoliths (a limestone concretion that built up slowly in the nasal cavities) and that all these small “stones” caused a constant sinus infection.

Our vet, therefore, recommended an operation to remove all these concretions, and thus free his sinuses.
She then proceeded to a trepanning of Harry’s sinuses. This consists of opening the wings of the nose on each side to remove everything.
It was then necessary that each side remained open as long as possible so that we could clean and cure the nasal cavities morning and evening. 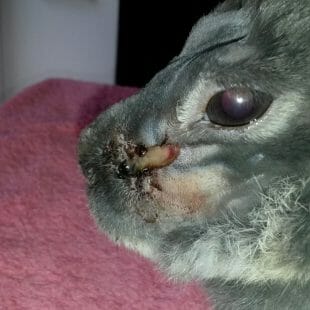 This daily operation was particularly difficult for us and especially for Harry, but it was necessary for his recovery.
When the holes closed, it was necessary to continue cleaning his nose every day, morning and evening (flush of physiological serum) because the rhinoliths came back. We were doing an even more thorough cleaning with a nose pump to gather Harry’s mucus.

As his mucus was very thick, Harry was entitled to a daily nebulization with this device: 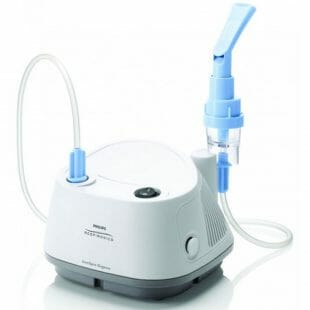 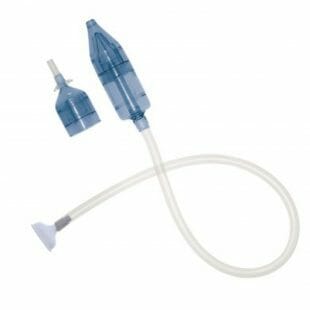 By mixing mucomyst (to fluidize the secretions) saline and essential oils (respicat), Harry breathed this with the help of a mask (we lay him down and he eventually fell asleep!) and this cloud of micro-droplets penetrated deep into his sinuses. This allowed us to have more fluid and easy to remove nasal secretion.
Harry could regularly have repeated sneezing attacks because the rhinoliths went down into his nostrils, he sometimes managed to expel them by sneezing, sometimes we helped him with the nose pump.

Harry lived with his daily care morning and evening (flushing nostrils cleaning + nose pump + nebulization) until the end of his life, from 2013 to 2017.
His breathing was satisfactory, but if we had not continued his care, he would not have been able to live normally, and certainly would not have lived as long.
We never knew how or why he made his “little stones”, a phenomenon that we often see in parrots!
What happened to him is quite rare and exceptional. His condition was still disabling but was not as serious as pasteurellosis.
With an infinite patience and trust in us, Harry has always let himself be cared for. I think he finally understood that without our help, he had more difficulty breathing properly.
I hope this article will help you identify, and take action for your pet in case of respiratory problems. I wish you a beautiful and happy adventure with your big-eared pet!

Tags:
Pasteurellosis
Newer 10 Best Treats for Rabbits
Back to list
Older Why should you neuter your rabbit?